The Spiritual Feat of Jesus Christ 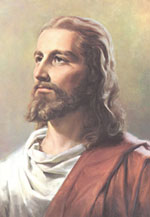 On Christmas eve, let us turn to the real meaning of the spiritual feat of Jesus Christ.

Jesus, one of the most advanced Spiritual Beings, occupying a very high position in the Hierarchy of the Light Forces, incarnated on our planet at a very dark and difficult time.

More than a thousand years passed since the departure from the physical plane of Lord Krishna, which marked the beginning of the darkest age of Kali Yuga. And about half a millennium passed since the departure of Blessed Buddha, and the Earth was plunging into darkness more and more. Therefore, on the threshold of the beginning of the new cycle, the era of Pisces, there was a need for the incarnation on the physical plane of a new Teacher, who would bring the new Teaching to the world. Through this pure conductor- the Higher Being physically incarnated on Earth, the pure energies of Divine Love and new knowledge could reach the hearts of all people.

But for this Divine Teaching to remain in the hearts and in the memories of people, to stay and to be spread in the world, a sacrifice was needed on behalf of this High Spiritual Being. In addition, this sacrifice had to be voluntary, in full understanding of what immense sufferings the physical body would have to go through during its implementation. This torture was almost unbearable and tested the limits of the embodied being whose spiritual level was extremely high and pure, compared to other people. This meant that the pain was incommensurate with the pain that an ordinary person might feel.

Why did this Great Sacrifice “work”? Because Jesus, even being on the cross, continued to experience love for his tormentors, pleading “Forgive them Father, for they know not what they do!”

“The feat of my son Jesus was in the fact that he continued to feel Love toward the people who tortured him, and were out for his death. That is exactly why millions of Christians all over the world continue to worship the feat of my son”

Even more, by passing through the crucifixion and resurrection, Jesus showed the people The Path itself. That very Rose Path that all of us follow, namely - realizing our destiny and sacrificing our whole selves for the benefit of all living beings. This, in spite of the fact that these same beings try to cause us pain. After all, we take their sins upon ourselves, having forgiven them.

By his resurrection, Jesus also showed the people the character that will be obtained by all mankind (each of us!) in the distant future.

Let us celebrate the Bright Feast of the Nativity of Christ with a feeling of tremendous gratitude and admiration for the spiritual feat, and the Great Sacrifice of the Beloved Jesus Christ!