The Illusion and its collapse.

A Teaching on the changing of consciousness.

Tatyana Mickushina is answering a question from Riga:

The Messages of the Higher powers state that humanity lives in an illusion. How does this illusion reveal in the physical world; how does it collapse, and can a person notice it; how does this change of consciousness show?

Indeed, quite a lot of Messages are dedicated by the Masters of Wisdom to the Teaching of the changing of consciousness. We can say that this is a very important Teaching, and of course some preparation is required to understand it.

Approximately 18 million years ago, humanity was endowed with intelligence. And then, when humanity was endowed with reason, it acquired the ability to control the energy that enters each being through a system of chakras – through each person in our world. The perfect Divine energy passing through a person, is colored by their inner state - their thoughts and feelings, and thus enters this world.

If we make choices which correspond to the Highest Law that exists in this Universe, the energy remains in a high-frequency form. But when we make the wrong choices, when we incorrectly qualify the Divine energy, then the energy becomes dense. When energy passes through our subtle bodies colored by our imperfect thoughts and imperfect feelings, it begins to condense.

So, over millions of years, the energy has become more and more concentrated, and now we see the physical world that surrounds us as it is now.

The Masters state that we have reached the lowest point of materiality, and that our future path, since this turning point has been reached, is that we must strive in an upward spiral towards the refinement of this world again, and the acquisition of more Divine properties.

I must say that if the evolution of mankind goes back tens of millions of years, it does not mean that some other people were incarnated. It is you and I who have been incarnated for tens and hundreds of millions of years on the planet Earth, and we will continue to be incarnated. But since the Law of evolutionary development operates in this Universe, we must develop according to the Divine Plan, improving ourselves more and more – improving our consciousness, improving ourselves in God. And so, as we improve ourselves - our thoughts and feelings will be more perfect. And the more perfect thoughts and feelings that we will have in the course of working on ourselves, we will be more elevated. The Divine energy will be passed through our energy system of chakras, and it will have a much more subtle character, a more exalted character, a more Divine character. And so, according to God's plan, the universe will collapse again - through our consciousness.

This is one of the main Teachings that the Master’s give. By studying this Teaching, we can understand why God created man in His own image. In fact, we are the creators of this world. And through us, this world exists in the form in which it is now. However in the future, this world will be transformed by our consciousness into a more subtle world, a Divine world. Therefore, we are in fact, God for this world. 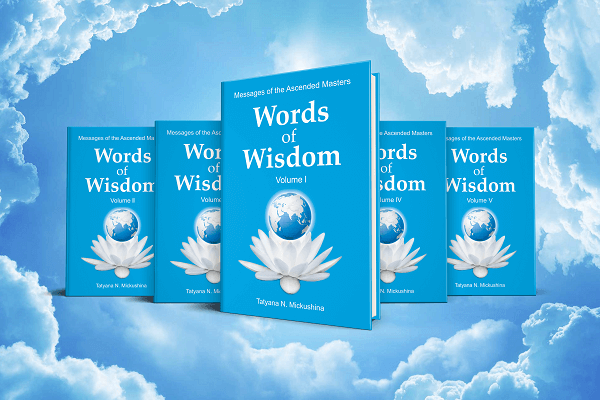 This is the five-volume series that contains Messages given by the Ascended Masters through their Messenger Tatyana N. Mickushina from 2005 through 2017.

During this time the people of Earth have been given the Teaching of the True purpose of the evolution — the aspiration of every soul to the Creator, to union with God, and adherence to the Highest Moral Law that exists in the Universe. This harmonious Unified Teaching also contains Teachings about the distinction between Good and Evil, the Path of Initiation, the change of consciousness, about Love, Karma, Freedom, happiness, nonviolence, about the Community, and many other Teachings.