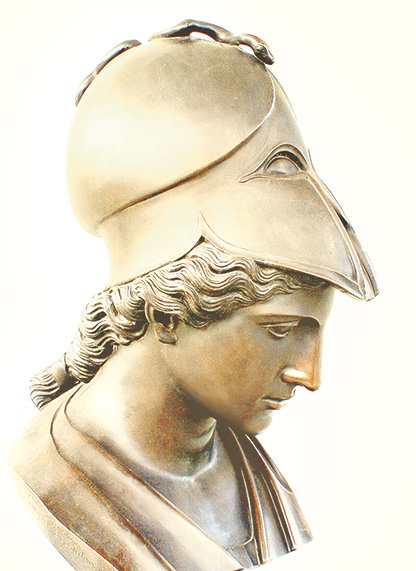 A Teaching on just and unjust wars[1]

1. I AM Pallas Athena. I am a member of the Karmic Board. I am also known as the Goddess of Truth. Long ago people worshiped me in temples that were created specifically in my honor. It was a long time ago in my beloved Hellas. And now, I wish to remind you of the fact that I am also a patroness of just wars.

2. Everything in your world has a dual character. Therefore, no matter how strange it may seem for you to hear this from Me, besides unjust wars, there are also wars that have a just character. Therefore, before participating in this war or that war, you should understand very well the motives that drive you and the people who have power and make decisions about unleashing war.

3. First, you must understand whether you will stand up for selfish interests in the course of this war or you will defend your land, your homes, and your families from an external enemy who threatens you and attacks on your land. The motive of every soldier participating in a war is very important. If a man goes to war with any selfish motives, then his participation in the war will burden him with the karma of his wrong actions. Selfish motives can be money, fame, power, a position or rank, as well as the spoils of war.

4. The Law of Karma is a very complicated Law of this Universe. Therefore, let us consider how participation in an unjust war will affect the country and its people who are involved in this war. Of course, during any war violence is applied, and people are killed. Therefore, it is important to understand what karma the country that is involved in an unjust war will be burdened with.

5. Each participant of an unjust war carries a part of karma. However, all participants have mothers and relatives. So, the whole family and even distant relatives and cousins of the person who is involved in an unjust war share the karma created by killing and destruction. That is how the whole family and the kin become weaker, and it could cause mental degradation and the physical extinction of the family.

6. Thus, the karma for an unjust war affects even those people who have little to do with direct participation in the military conflict. In addition, there is the karma of the country that is taking part in the unjust war. This karma weighs on the entire population of the country, and is spread among all the members of society. As a rule, it leads to cessation of the flow of Divine energy granted to the country. The lack of Divine energy is manifested as the lack of abundance, starvation, mental disorders like schizophrenia, obsession, depression, a propensity to commit suicide, or aggression in a significant part of the population of the country.

7. Of course, a bigger part of karma for an unjust war lies upon those people who make a decision to start the war. However, as I mentioned above, the karmic burden lies upon every person living in this country, because none of the wars can start if there are no people who are willing to take part in the war for the sake of personal gain and profit, or in order to master the skills of killing using live targets.

8. A healthy society will never allow itself to get involved in an unjust war because it is well aware that the responsibility for the war will fall upon many generations.

9. Now, with regard to waging just wars, provided that a soldier takes part in a battle with the aim of protecting his country, his land, or his family and not for personal gain or profit, and that the soldier is ready to selflessly sacrifice his life for the common good and for his country’s well-being, then his actions will be considered as correct, and even in the case of the soldier’s death, this will not weaken the family to which he belongs — on the contrary, it will strengthen his family’s energy.

10. Self-sacrifice for the sake of others can be considered non-violence in the case when a man is ready to be a human shield between his loved ones and those who attack. This highest act of self-sacrifice creates good karma for the whole family and the country. The purpose of my Message today was to clarify the problem of just and unjust wars. I think that in the currently-formed conditions in the world, my Teaching will be helpful to you, and you will be able to put it into practice in your lives. I AM Pallas Athena.

[1]Short Rosary based on the Dictation of Pallas Athena of December 22, 2015.